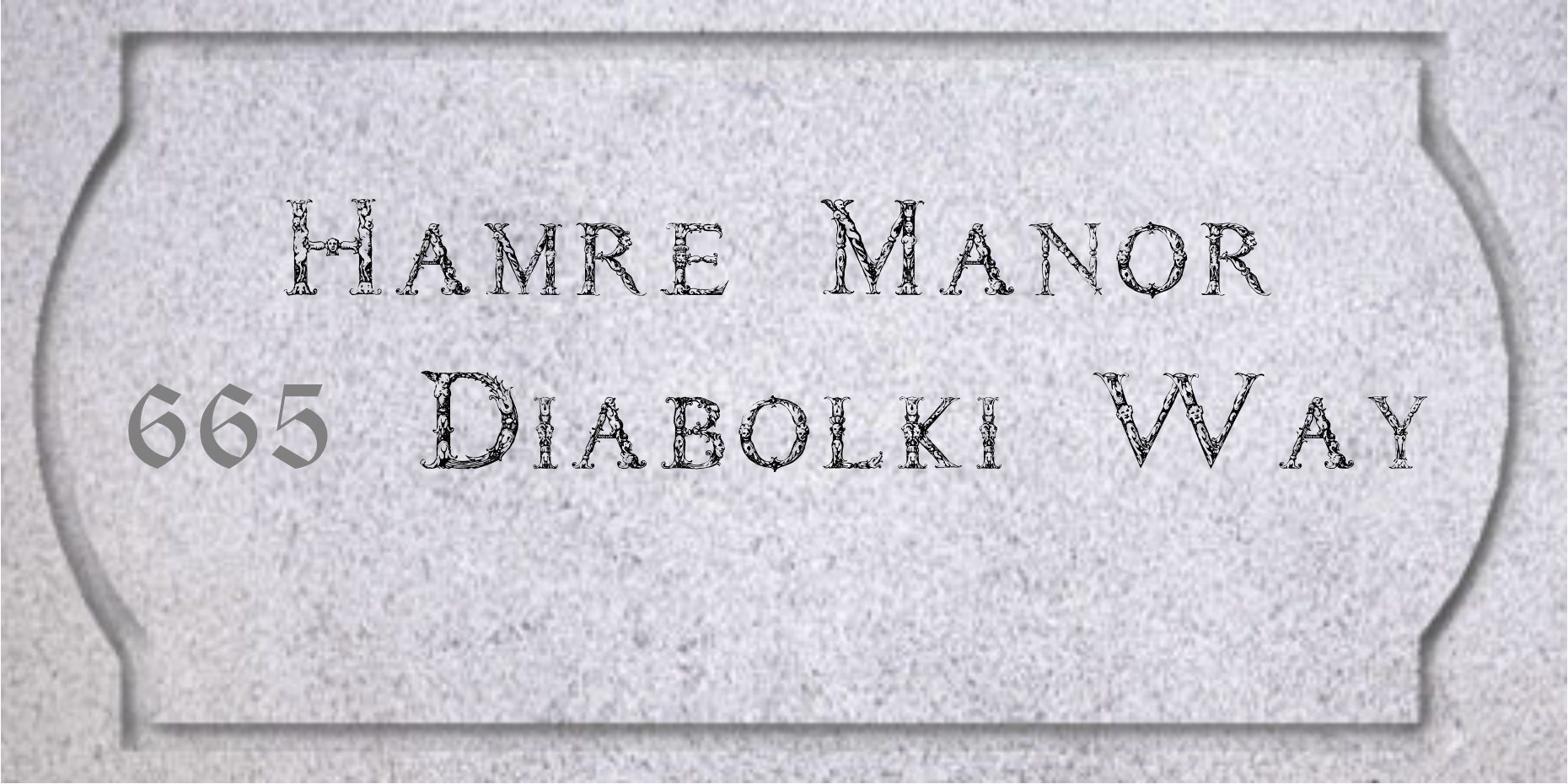 In 1867, Josiah Hamre raised Hamre Manor for his fourth blushing bride, Lady Lucinda Ashcroft, in the black woods of Shadows Hollow.  ‘Twas an odd retreat from urban life for such a well-connected newlywed couple, but the property had been in the Hamre family for many generations, and Josiah’s and his new wife’s fascination with the dark spirit realm and the occult seemed to all but drive them to that location.

Almost immediately, wild stories from servants and invited guests of hauntings, spirits, and vile shadow creatures inhabiting the grounds began to emerge.  But instead of serving as cautionary tales, these stories seemed to attract a growing number of visitors to the manor with each passing year.  Many felt that a dark power was gnawing at the very fabric of the Hollow, but visitors and seekers continued to make pilgrimage to the manor year after year, until…the disappearances.

On October 31, 1886, an intimate group of eleven persons were invited to Shadows Hollow for a very special All Hallows Eve celebration.  No one is quite sure what dark happenings occurred that stormy night, but it is said that a vile, evil cloud hung heavily above the manor house.  Cyclonic wind and rain buffeted the manor, as did a never ceasing storm of lightening and thunder.  Then, as it seemed like the very earth around the estate would erupt, a vast concussion of darkness was seen to emanate from the house like an explosion.  Trees were felled in a one-mile radius within the Hollow.  It was understood that while no one heard the blast, a few in the outlying areas stated that they “saw” the violent wave of blackness.  The resulting devastation to Shadows Hollow was seen by many in the years that followed.  However, Hamre Manor – at the center of it all – was relatively untouched.  Those within…well…that is another matter altogether.

There were thirteen people in the manor that evening.  Servants who were working at the house earlier that day attested to that.  But upon arrival the next morning, the servants found only Josiah Hamre alone – looking much disheveled – sitting in his study holding his wife Lucinda’s black diamond pendant in one hand and her lace wedding veil in the other.  But search the house as they did, never again was there any sign of Lucinda nor the other eleven guests from that night.  When questioned by authorities in the days that followed, Josiah would only say that they had all left the manor quite unexpectedly that night, including his beloved Lucinda.  In anger, he would curse the Lord of Shadow and vowed to bring his wife back if it was the last thing he did.  A year later, Josiah closed the house, and embarked on his journey to find the Temple of Diabolki – the Fallen God – in the deep, dark jungles of the Amazon.  He never returned.

Now, one hundred and thirty-three years later – coming off of his recent re-discovery of his great grandfather’s lost temple and treasure of Diabolki – Dr. Nathan Hamre has come home to Hamre Manor, 665 Diabolki Way, in Shadows Hollow.  Settling in, Dr. Hamre readily admits that all is not right with the house, and the darkness that filled the halls over 100 years ago is still present.  Nevertheless, for brave adventurers in this day and age, dark secrets await.  It is rumored that Dr. Hamre has brought a priceless artifact with him to Hamre Manor from the Temple of the Fallen God – an offering or provocative gift for the Lord of Shadow himself…the head of DIABOLKI!  Perhaps this will goad…or compel the Lord of Shadow, his Matron, and his shadow-spawn to visit the old manor house.  Old tales of the house tell that shadow loves the upper attic rooms of the manor most deliciously.  Truth be told, the manor is indeed haunted and full of shadows that seek to consume all who enter.  Hamre Manor only awaits the return of its Lord and Matron to be complete.

Of course, all this is rubbish and insane folklore; however, Dr. Hamre readily admits that there is, in fact much interesting and unexplained phenomena within the attic rooms of the manor.  And such energies seem to feed on the presence of inquisitive guests.  Therefore, you are hereby invited to be the personal guests of Dr. Hamre, himself, to spend time exploring the mysteries of the manor attic rooms.  No need for concern.  What happened to those twelve guests and Lucinda Hamre can easily be explained.  And the Lord of Shadow and his Matron are just scary stories we tell our children, after all.

What harm could possibly befall you?  Please send your R.S.V.P to Hamre Manor, 665 Diabolki Way, Shadows Hollow, right away.  We’re dying to make you ours…I mean our guests.